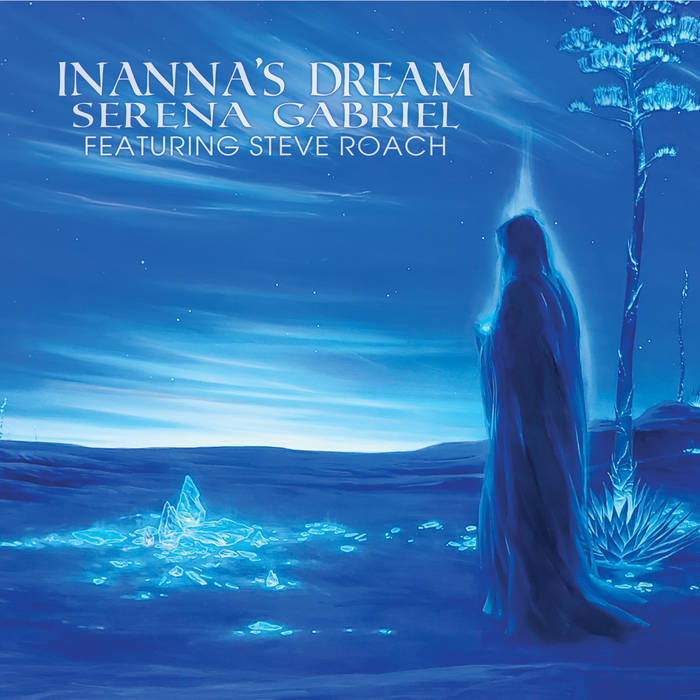 Gerrit Wessendorf I don't really want to connect this album only to bad times, but it is especially the bad times when I find it is so much more than just a beautiful soundscape or listening experience. It gives solace, peace, helps healing, realigning myself to the present, it lifts the weight, provides a safe space. There's so much I love about this album and all its tracks. Favorite track: Song of Sending.

Mark Jones Inanna's Dream is rich, vibrant, cave music, with spirals of light that uncoil deep into the darkness of earth. While there is obvious craft in the execution, her music resonates in its clarity of feeling and warmth of human-ness.

In the final resonances and complex drones, I feel like I'm given an antidote to poison and an invitation to sleep for an age or two, or at least until things have calmed down for a bit. Favorite track: Dunes of Solace.

*To order this album on CD, visit the Steve Roach Bandcamp page:
steveroach.bandcamp.com/album/inannas-dream

Inanna’s Dream is a multi-instrumental ambient sonic odyssey of pure emotion and enchantment. Through the six electroacoustic offerings, feelings of yearning, vulnerability and epiphany are infused into a heart and soul stirring expression that accesses the collective well of human experience. The alchemical blend of archaic and contemporary musical techniques and instruments, including the voice, activate a powerful opening into sacred space.

The rich landscapes invoked by Inanna’s Dream are borne from a life deeply dedicated to music and the healing arts. Alongside her work in holistic medicine, Serena Gabriel has been intently exploring the interweave of ancient musical instrumentation with modern technology. Intention, physical movement and breath guide her path in the creative process. This dance of energy is expressed, for example, through the breathing bellows of the harmonium, the earth tones of the didgeridoo and vocals that originate from a place of devoted authenticity. Adding to the vocabulary are various drums and percussion, flutes and lyre which breathe life into the live looping techniques, audio effects and synthesizer... more

If the CD had contained only the track Dunes of Solace, I would have been satisfied. Deep it takes me into all things unaddressed, unnamed, unhealed and unearths them, bringing them to the light so that I may make friends with them, knowing they will hold me back no more. And the rest of the cd is great, too 😊🙏🏼❤️
-Garret Sorensen

This album went through all the emotions flowing in and out. Her voice takes you into a place that’s so entrancing you float, fall, fly and just let go and be one with it. Thanks for the beautiful album.
-qigongmark

A new collaboration between two Tucson musicians serves as a welcome reprieve from the lingering summer. Inanna’s Dream by Tucsonan Serena Gabriel was composed as an “ambient sonic odyssey,” drifting between the worlds of new age, drone and electronic music. Inanna’s Dream is the premiere release on the Soundquest Music label, formed by local ambient pioneer Steve Roach, who is featured on multiple tracks.

While the album features several hallmarks of Roach’s style – sweeping synthesizer notes, tribal percussion fused with ambient tones, a massive yet meditative atmosphere – Gabriel makes the album unique with her hypnotic vocals and a combination of acoustic and electronic instruments.

With a goal of interweaving ancient musical instrumentation and modern technology, Gabriel touches on feelings of vulnerability as well as rapture. She accomplished this through cool yet mantric performances on the harmonium, flute, lyre and dholak drum. In usual style, Roach contributes his expertly layered atmospheres performed on a score of keyboards.

The album’s highlight is “The Song of Sending,” which features all the elements that make Inanna’s Dream unique. A calm harmonium is infused with Gabriel’s airy vocals and steady percussion. Several layers build as the drones grow darker, yet remain subtle as incense smoke. “The Gazing Pool” is another treat, with strings panning back and forth on top of reverberated tones like drops of water.

It should be noted, however, this album really is for fans of ambient music; multiple tracks stretch past the 10-minute mark, with the album’s culmination “Changing Tides” drifting on for the better part of an hour.

According to Soundquest Music, Gabriel is a musician, dancer, healing arts practitioner and medicine music provider, whose aspiration is that her dedication to the vast potential of sound for positive transformation can be experienced through the essence of the musical offerings she creates.

It’s fitting that the project’s name references Inanna, the Sumerian goddess of love and sensuality, but also war, because the album is as soothing and hypnotic as it is immense. -Jeff Gardner

Produced and mixed at the Timehouse by Steve Roach


dormant but not sleeping
awaiting in movement
loving, present, decisive
memories return
the way is clear
it all makes sense
the enchantment, the trust,
the sorrow, the adventure,
the curiosity, the disappointment,
the joy, the contentment,
full integration
complete
one with the infinite
so beautiful
honor the reflection
embrace

Serena Gabriel utilizes the technologies of music, meditation and dance to invoke inspiration & healing to those around her. Sacred sound is an essential component of her work as a recording & performing artist and of her healing practice (SereneHealingArts.com ). Serena plays a beautiful variety of both acoustic and electronic instruments. ... more

Bandcamp Daily  your guide to the world of Bandcamp